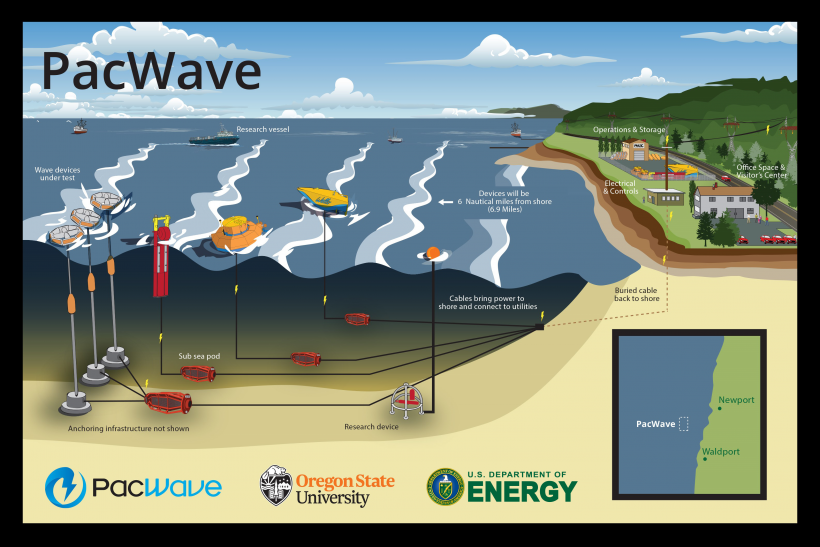 Several reports in recent weeks have demonstrated major appetite for marine renewables on the US West Coast, as the energy transition continues to intensify.

A CNBC report focusing on the Oregon-based PacWave initiative helped spread word to the masses about wave energy’s potential contribution to the future green energy mix.

The open-ocean wave energy test site will have two separate facilities: PacWave North, for small-scale and prototype technologies, and the larger PacWave South. The latter is currently under development after attracting grants from both the US Department of Energy and the State of Oregon.

It will be the first commercial-scale, utility grid-connected test site in the US to obtain a FERC licence. It also signifies the first marine renewable energy facility in federal waters off the Pacific Coast.

This continued progress and top-level endorsement brings great satisfaction to CorPower as we advance similarly ambitious plans in Western Europe. Our dedicated test site in Aguçadoura, off the coast of Northern Portugal, will take centre stage later in 2021 as we launch our first commercial scale wave energy device, in the eagerly anticipated HiWave-5 Project.

The full-scale C4 WEC will later form part of a grid-connected array delivering power to businesses and homes in the locality. Further afield, CorPower has partnered with project developer  Simply Blue Energy with a pioneering wave and floating wind project, Western Star, off Ireland’s West Coast, as the supplier of its C5 WEC devices.

The wave energy element dubbed ‘Project Saoirse’ will be located 4-6km off the coast of County Clare, and deployed in two separate stages graduating from 5MW to 25MW capacity.

A major benefit which wave power can bring to the future green energy mix is its consistent power profile. This ultimately providing a balancing effect, creating a more uniform combined power profile – when united with wind and solar.

In this respect, the technology is set to play an increasingly important role preventing overreliance on wind and solar, by offering a consistent renewable energy source when the wind isn’t blowing and the sun isn’t shining.

Back on the US West Coast, construction work on PacWave South will begin this summer with operations starting by 2023. The facility will have a 20MW power capacity, with a ‘pre-permitted’ policy meaning wave energy developers won’t need to apply for permits or permission to deploy their technology there.

Once complete, the facility will bolster America’s marine energy testing infrastructure, which also includes the US Navy Wave Energy Test Site in Hawaii.

In further developments on the US West Coast, California State and the Biden administration recently agreed to open federal waters off central and northern coast for new windfarms.

This represents a firm step towards the first commercial offshore wind energy program on the West Coast, ultimately helping chase down ambitious climate targets, and further underpinning President Biden’s broader mission to create 30GW of offshore wind energy by 2030.  The new projects, if approved and built, would provide a major expansion of offshore wind power in the US. Currently, there are just two working offshore windfarms, located near Rhode Island and Virginia.

However, providing a clear signal of growing intent, more than two dozen others are now in development. And with the unstoppable march of wind energy, we anticipate a similar upward trajectory for wave power – as the technology becomes more firmly established as a vital component in a cleaner, safer and more affordable global energy system.

Photo Credit: US Department of Energy

CorPower ramps up Portugal operations ahead of HiWave-5 deployment

Some pictures from our buoy!

Click above to see our Stage 3 composite buoy shipping from Portugal to Sweden this week. Gallery: CorPower...
Sep 22, 2016  /  0 comments