Global financial institutions must invest in the ocean as our ‘best ally’ to beat climate change, according to a panel of experts at a United Nations Blue Economy seminar.

The event, co-hosted by the United Nations Environment Programme Finance Initiative (UNEP FI) and the Government Offices of Sweden, set out how financial institutions can both support and benefit from ocean health. CorPower joined the panel offering industry insight from the marine renewables sector.

A healthy ocean is key for a sustainable future both for people and the planet. In economic terms the annual value of goods and services produced is estimated at USD 2.5 trillion per year, equivalent to the world’s 7th largest economy. However, ocean health is currently under threat, faced with the triple crises of pollution, nature loss and climate change.

Experts agreed that a new surge public sector funding, coming via initiatives like the EU Green Deal, must now be coupled with similar commitments from private sector investors. And this can be achieved with clearer demarcation of ‘sustainable blue activities’, redirection of mainstream financing and creative new packages like ‘impact funds’ and ‘blue bonds’.

UNEP FI – a partnership between the UN Environment Programme and the private financial sector – works with more than 400 banks, insurers and institutional investors to develop the global sustainable financial agenda.

More specifically, it convenes a community of practice on Sustainable Blue Finance focused on providing guidance and tools to ensure investment, underwriting and lending activities are aligned to the UN Sustainable Development Goal number 14 – Life Below Water.

UNEP FI Project Coordinator Dennis Fritsch, who led the debate, said: “The ocean and its health is a topic which has gained increased attention recently, due to multiple threats facing marine ecosystems,” he said. “But also, because healthy marine ecosystems can be strong contributors to tackling the climate crisis as well as nature loss. We are focusing specifically on why it’s important for financial intuitions to consider ocean health in their business process and how they can support a healthy marine environment, while also rethinking its benefits.” 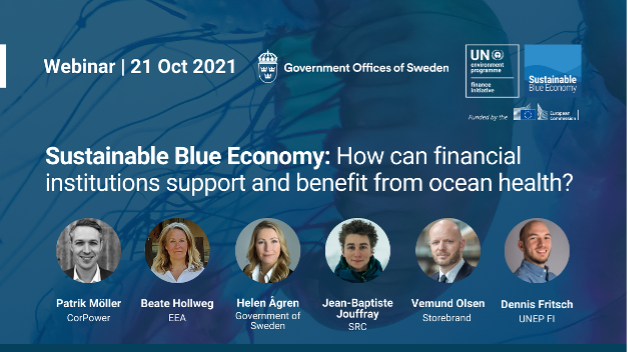 Helen Ågren, Ocean Ambassador, Swedish Government Offices, provided the opening remarks, explaining why ocean health is crucial to both society and the economy in an international context. “The ocean provides many tangible ecosystem services, including infrastructure for transport, food and recreation,” she said. “However, there are also ecosystem services which we rarely even take note of. For example, that fact the oxygen from every second breath we take comes from the ocean, or that the ocean has absorbed 90pc of the excess heat generated by anthropogenic climate change, and some 30pc of carbon dioxide emitted. The ocean is our best ally against climate change, but the price tag is high with ocean warming, marine heat waves, rising sea levels, acidification, oxygen depletion and dead zones. In combination with emissions of hazardous chemicals, overfishing and coastal exploitation, we see disastrous effects not only on marine life but also for people who depend on the ocean for food and livelihoods. The threats to the ocean are many, but opportunities are plentiful and increasingly recognised. The OECD estimated that all economic activity in the ocean provided USD 1.5 trillion gross value added in 2010. Other studies have valued the ocean as the world’s 7th largest economy with an annual gross marine product of USD 2.5 trillion per annum. Looking towards the 2030 horizon many industries in the ocean economy are widely forecast to outpace global economic growth. Predictions suggest it could double by 2030, reaching USD 3 trillion. We see a mix of new and mature companies, from start-ups driven by a quest for sustainable solutions to more mature companies, like the shipping industry striving to innovate and become Paris-aligned. With this picture of threats and opportunities it is quite surprising the UN Sustainable Development Goal Number 14 – Life Below Water, is the most underfunded goal in Agenda 2030. That is true for Official Development Assistance (ODA), philanthropy as well as private investments. Even worse, the OECD has studied ODA supporting ocean-based sectors and numbers are small. Only 1.6pc of ODAs support ocean-based activities and only half of that amount, around USD 1.5 billion per year, support a sustainable blue economy.

“In December 2020, the EU adopted the European Green Deal, developing policy that will transform the EU into a modern, resourceful, efficient and competitive economy, with net-zero carbon emissions by 2050. The Green Deal, is also a ‘blue deal’ that aims to protect our biodiversity and ecosystems, reduce air, water and soil pollution, move towards a circular economy and reduce waste management and ensuring the sustainability of our blue economies. In addition, one third of the EUR 1.8 trillion investment from the next generation EU Recovery Plan and the EU’s 7-year budget will finance the European Green Deal. But public funding, private funding and investments must go hand in hand. The former should be used to mobilise private investments and incentivise innovations which supports the transformational changes that are needed.

“The ocean is threatened, but it also holds major opportunities If we succeed in reversing the decline in ocean health and depletion of its resources. We need both public and private sector investments. New instruments are being developed like’ impact funds’ and ‘blue bonds’ but it will be even more critical to adopt clear principles to redirect mainstream finance towards a sustainable ocean economy.”

Providing his viewpoint on the role of innovation in the sustainable blue economy, CorPower Ocean CEO Patrik Möller, set out the value proposition of ‘solution-orientated’ businesses operating in the space.

“As an ocean energy technology developer, we are working to harvest clean electricity from our oceans,” he said. “There is a tremendous opportunity for innovation across the sustainable blue economy, and if we look at the energy field specifically, ocean energy will be the next big advance in clean energy. We have witnessed huge progress in wind and solar sectors in the last decade, making significant contributions to decarbonise global system. In the following decade we are likely to see a similar pattern with emerging forms of ocean energy. The scale of the opportunity is enormous with wave energy alone capable of generating around 500GW of clean electricity – enough to support 10pc of global electricity use, and equivalent to all nuclear or hydro power currently generated today. We are working in meticulous detail to combine commercial interests with a sustainable, long-term view to deliver technology which works in harmony with the oceans.

“What really makes the ocean attractive from an energy system perspective is the power profile offered by ocean waves is much more consistent and predictable compared to other existing renewable energy sources, such as wind and solar. In this sense the oceans act like a huge battery, or energy storage reservoir. For example, the west coast of Europe benefits from weather systems generated in the US, Canada and Greenland, which draw winds into the ocean, concentrating and smoothening the energy flow. When the waves reach the west European coast, there is often little correlation with wind flow, meaning it can fill the gaps in our future clean energy systems. Essentially, by combining wave, solar and wind we can harness a much more balanced and stable power source, and ultimately transition to a more sustainable, long-term clean energy solution, at the lowest possible cost and highest possible reliability. Another benefit of ocean energy is its low environmental impact, with little visual disturbance, while also boosting biodiversity by creating larger protected areas across array locations, where trawling and fishing is prohibited. However, while ocean energy remains a glittering opportunity, we still require greater market pull and acceleration to achieve volumes needed for economies of scale.”

Jean-Baptiste Jouffray, Postdoctoral researcher, Stockholm Resilience Center, said the discussion was timely with humanity now facing unique challenges regarding our relationship with the ocean, dating back millennia. He said the current era, described as the ‘blue acceleration’, was unprecedented in terms of the diversity, intensity and extent to which we use the ocean realm.

“The ocean is seen as a new economic frontier and also a solution for sustainable human development,” he said. “We are going to the ocean for four fundamental needs – food, energy, materials and space. Since 2000, aquaculture has been the world’s fastest growing food sector. Elsewhere, offshore wind energy capacity has increased 500-fold globally, while 70pc of new oil and gas discoveries have occurred offshore. Meanwhile, 65 million cubic metres and desalinated sea water are now produced every day, with maritime transport quadrupling and an area equivalent to the size of Peru has been leased for deep-sea mining exploration. There is clearly a race to the ocean, and while it comes with opportunities there is also risk, because all of these activities have an impact and take a toll on the environment. This presents a big governance challenge to steer that race in the right direction. What is required is both a sustainable and equitable blue economy, because if there is a race to the ocean, we need to understand who is leading and who is left behind. We need to then bridge that ocean finance gap and redirect the finance that is currently flowing into the ocean economy.”

Hollweg explained that the transition to a sustainable blue economy is an opportunity for financial institutions, governments and other stakeholders to re-cast how we use, manage, and protect ocean resources in line with the UN SDGs 13 – Climate Action, 14 – Life Below Water and 15 – Life on land.

“We aim to achieve this in three main ways. Firstly, by investing in solutions solving social and environmental problems. Secondly, by creating changes to the real economy by using the shareholder influence to make companies improve, and thirdly by excluding companies which don’t meet our minimum standards. A sustainable blue economy is very important to us, we are invested in multiple sectors which depend on healthy ocean for long term profitability, but also have very real and serious impacts on the ocean, including aquaculture, shipping, energy and infrastructure. In this sense, it’s important for us to assess as accurately as possible both the impact and dependencies on the ocean of the companies we invest in. This provides a better understanding of the risk involved and helps us to push companies to reduce their impact, for instance by decarbonising shipping, or limiting deforestation or biodiversity impacts. We’ve signed the UN’s Sustainable Blue Economy Financial Principles, and use UNEP-FI’s guidance actively to implement them. The guidance is instructive for all three workstreams – solutions, engagement and exclusions – because they include recommendations on the sort of activities to seek out, the kinds of issues to engage companies with, or to avoid altogether. Depending on the needs of different financial institutions, be it the bank, insurance or asset management sectors, the guidance can be applied in different ways which increases its relevance.”

A prominent report produced by the US Department of Energy (DOE) and the Pacific Northwest National Laboratory...
Jan 26, 2022  /  0 comments